IR1 - Buddha and Beyond in Bihar

IndieRoverS debuted by travelling across some of Bihar’s (India) religious hotspots. Our journey was aimed at exploring the historical side of these sites.

The closest city is Patna and can be reached by flight or train. From thereon we recommend you hire a cab which will drastically reduce the travel time to any of these sites. Since we already were in different parts of Bihar before this trip, we reached Bakhtiyarpur by train and reserved an SUV to travel around Pawapuri and Nalanda in 2.5 hours.

Pawapuri is where Mahavira, the 24th and last Tirthankar of Jains attained salvation. The whole town (puri) is sprinkled with Jain temples, most important of which is the Jal Mandir. The sanctum sanctorum houses footprints (pawa) of Mahavira and a marble temple has been constructed to mark the exact spot where he was cremated. 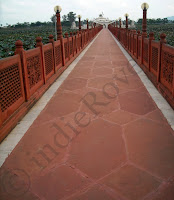 The temple is named so because of being situated in the middle of a water (jal) tank. There is a pucca passage to the main temple flanked by swarms of lotus plants, mostly decayed.

We drove around this sleepy demi-town only to find some of the other temples being shut, purportedly for a nap. The entire area rouses to life during the festivals of Diwali (date of Mahavira’s salvation), Mahavir Jayanti (birthday), Paryushana and Samvatsari when it is brimming with Jain devotees. 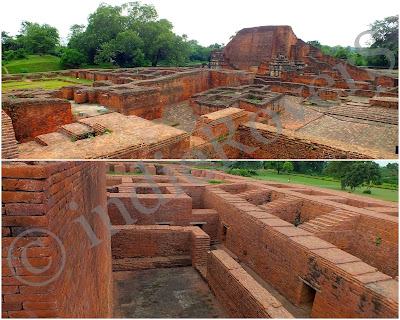 Next stop was at Nalanda, famous for its monasteries and shrines significant to the Buddhist traditions. The Archaeological Survey of India maintains a museum housing sculptures (mostly of the Buddha in different poses), copper plates, seals, plaques and coins among other discoveries from this area. On the other side of this museum is the main attraction of Nalanda: ruins of 6 temples and 11 monasteries spread over more than a square kilometre. They are all arranged in a well-planned layout impressing upon us the depth of its influence during its heydays.

We recommend you spend at least an hour to walk around these ruins while soaking in the splendour of college and hostel life in 5 A.D.!

The complex is closed for visitors after 5.30pm.

Our final stop for the day was at Rajgir. This is a town of religious importance to both the Hindus and the Buddhists. There is a collection of seven hot-water springs and a pond, locally known as Brahmakund. These springs are believed to have medicinal properties that help in the cure of skin diseases. Our main reason of visiting Rajgir was to take a dip in these springs and one of us did exactly that.

Owing to the holy Hindu month of Saavan, the area was teeming with devotees dressed in saffron and a fete like atmosphere prevailed there, replete with a ferris wheel! Searching for an ATM, we ended up walking a long distance from the Brahmakund to the town’s main market, through a dimly lit and sparsely populated road lined with ‘guest houses’.

Day 2
The other main attraction of Rajgir is the ‘World Peace Stupa’ built in 1969. It is among one of the 80 such peace pagodas constructed across the world to spread the central tenets of Buddhism.

This attraction is aided by a ropeway which leads to it. The ride is slow giving you ample time to soak in the breath-taking natural beauty and you may spot some monitors, just like we did!

On the top, there is the Stupa,

The ropeway’s ticket is priced at Rs. 60 and it is shut during lunch hour from 1pm - 2pm.
We persuaded a horse-drawn carriage (tonga) to ferry us back and forth from the Stupa, just for Rs. 100! We stayed at Bihar Tourism’s Hotel Tathagat Vihar which was reasonably priced and had a cordial staff.
By the time we returned from the Stupa it was late noon and the overcast sky gave way to mild showers. This foiled our plan of revisiting the ruins at Nalanda and instead we simply booked a cab to...
Bodh Gaya
The main town of Gaya is bustling with the activities characteristic of any semi-urban area in a not-so-developed state. There is a military cantonment on the outskirts and the airport has direct flights from New Delhi, Kolkata, Bangkok, Colombo and Yangon. Now you know what to expect when you move from the obvious Gaya to the holy Bodh Gaya. We suggest you choose the latter for your stay as it is physically only 3 miles away, but spiritually, many miles beyond!


We stayed at Bihar Tourism’s Hotel Siddhartha Vihar that was quite comfortable on all grounds, except for their restaurant services.

The Mahabodhi temple complex is a vast area constructed around the peepul tree under which Buddha attained enlightenment. Visitors have to remove their shoes at the entrance and the delicate-footed may want to carry socks or shoe-liners to traverse the open-air complex. Sitting under the shade of this magnificent tree was one of the most soothing experiences of our lives. Time flew by without a whisper and if I could, I’d be rooted there forever. 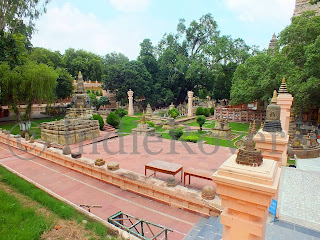 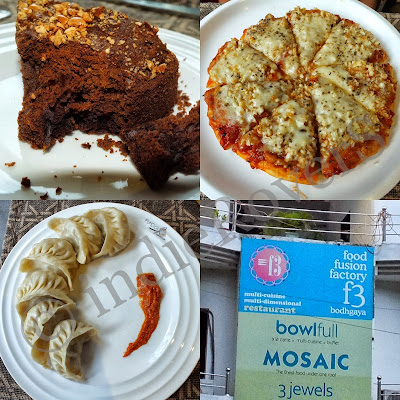 We eventually goaded ourselves out of this complex and headed back to the hotel for a siesta.

In the evening, we walked into a fancy-looking restaurant called F3/ Food Fusion Factory and the service was painfully slow. When our orders finally arrived, the brownie was burnt on the inside, the garlic pizza had way too much garlic and the chicken momos were under-cooked. Phew!
We walked over to the '80-ft. Buddha' statue that was constructed in 1989 and consecrated by HH The Dalai Lama.


Day 4
It was originally supposed to be the day of our departure from Bodh Gaya and return to our destinations. A series of unpredictable happenings right from the morning ended up making it possibly the most stirring day of all! Even before dawn could break, S. had an acute stomach ache which he suspected to be an ulcer pain, or maybe the momos were acting up. He held his calm and his stomach till 6am, finally requesting the only available hotel staff to head out and get some medicine to soothe his pain. The blessed soul rode his bicycle to the far end of the town looking for an open pharmacy and bought back the said medicines.

In a few hours, S. was in a condition to walk and we headed to the railway station. The train that was supposed to take me back arrived much after its scheduled time and once there, simply refused to leave as expected. The wait for it had upped my frustration which got further fueled by the knowledge that this is a train best-avoided if one has to ever reach anywhere on time. S. had been chivalrously waiting for my departure and had to forego boarding his train. That was it! I stomped off the train and the charm of Bodh Gaya pulled us back to it.

That evening we headed back to the Maha Bodhi complex and walked around in the soothing environs enhanced by the solitude of a star-lit sky. For dinner, we decided to play safe and chose the only dedicated south-Indian food joint. This place also disappointed us with their preparations. How wrong can you go while making a simple dosa and chutney? Visit them to know it for yourself!

Amidst all these disappointing food-related experiences, the only saving grace was our breakfast at ‘Swagat Restaurant’ on Day 3. It is located at walking distance from the Maha Bodhi temple complex, has a decent menu, amiable staff and good ambience. The service was a little slow, but the quality of food and flavours were just fine.

Day 5
For our return from Bodh Gaya, we chose the state government’s luxury bus-service (a Benz, no less) to Patna.

Kanwariyas are Hindu devotees of Lord Shiva who undertake an arduous journey of collecting water from the holy river Ganga and offering it at their local major Shiva temple. In this region, the water is collected from Sultanganj (Bihar) and offered at Deoghar (Jharkhand), a distance of 109 km (details here). The entire journey has to be begun and completed within the month of Saavan where devotees are expected to maintain rigorous piety that includes walking barefoot. 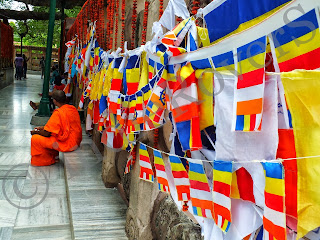 The area immediately around the Maha Bodhi tree is filled by rows of such flags by Buddhists from various countries. It seems as though space-claiming is an essential activity in marking the presence of devotees from a distant land.
RoverS Say

Coming Soon: R trails the ruins of Chalukya and Vijayanagara empires in northern Karnataka, India.
Posted by IndieRoverS at 8:57 am
Email ThisBlogThis!Share to TwitterShare to FacebookShare to Pinterest

IndieRoverS
India
Shekhar and Radhika are independent travelers in their mid-20s. With their respective penchants for the frigid and the tropic, they hope to present a composite picture through his lens and her pen.

This work is licensed under a Creative Commons Attribution-NonCommercial-NoDerivs 3.0 Unported License.